i spent a week on the north west coast with my cousin/sister/bff, chelsea. it was glorious and i feel so special she picked me to join her!

chelsea picked me up at the airport around 1:30 and after we got some essentials at trader joe’s and walgreens, we explored portland a bit. first we went to coava coffee roasters. it was a pretty straightforward place with just five menu items. i loved its simplicity and the coffee was delicious. 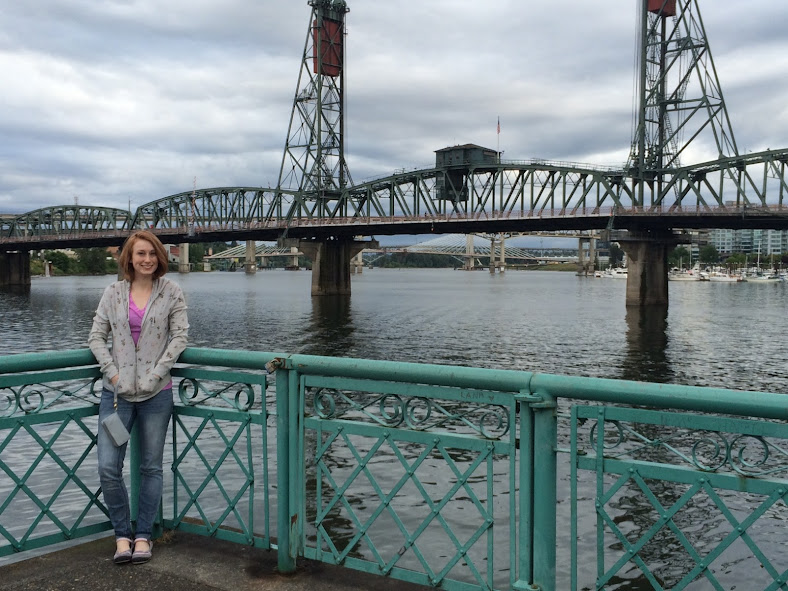 after enjoying our drinks, we made the mandatory visit to powell’s books. we didn’t stay long because it was huge and overwhelming and we were hungry, but i can see how people can very easily spend hours and hours in there. we found our dining establishment, isabel, by luck, and as luck would have it, my meal was quite delicious. coconut rice is quite awesome.

after dinner we headed to our campsite, wal-mart. oh yeah, we slept in the back of a truck all weekend (sounds terrible, but it was actually really comfy). we settled in for the night, but before we could fall into deep sleep we heard knocking on our windows. it was the night patrol woman telling us we couldn’t stay overnight. doh! so at 1:00am, we headed to another wal-mart and made it through the night! 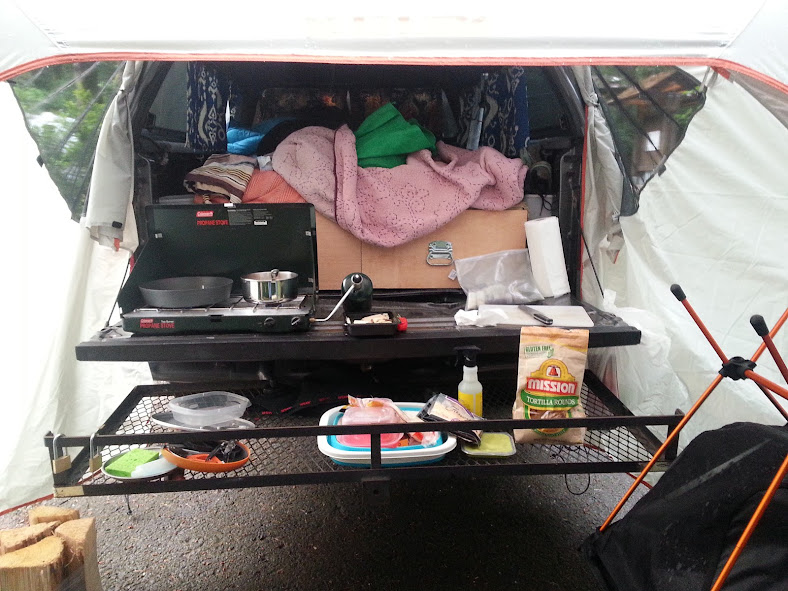 since i was in portland, it was only natural that i wear my bird sweater. am i right?! 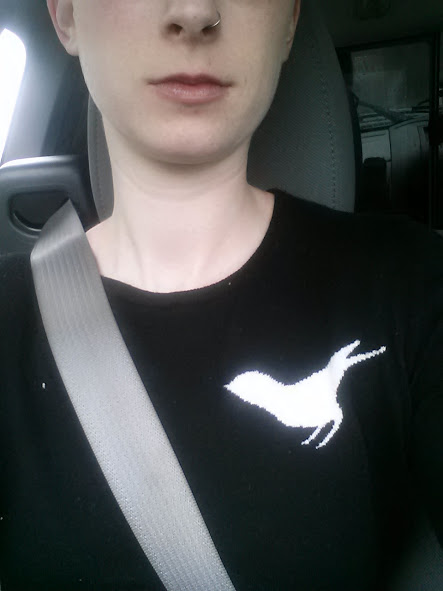 monday morning we went to lovejoy bakers, which was recommended by a friend. we both got coffee and split a breakfast sandwich and a piece of monkey bread. the coffee and monkey bread were great, but the sandwich was grrrrreat!! so great.

next on our agenda was exploring portland via bike. we rented our bikes despite the ominous looking clouds covering the city.

five minutes into our bike ride, while on the middle of a bridge, the aforementioned ominous clouds opened up and showered us with rain AND hail. we were soaked and cold, but continued on our way.

we biked to a street recommended to us by the guy that rented us our bikes. it was lined with eclectic shops and restaurants. we stopped and ate lunch in a little courtyard area where i found some delicious home-brewed kombucha to buy and enjoy. 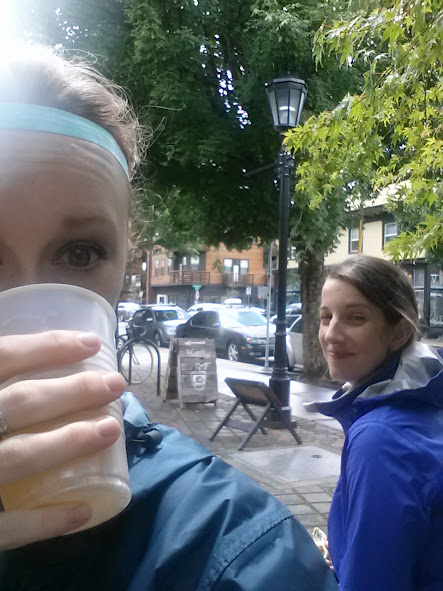 after lunch, we biked five very hilly miles to the international rose test garden. it was a tough journey, but so worth it. the rose garden was beautiful!! 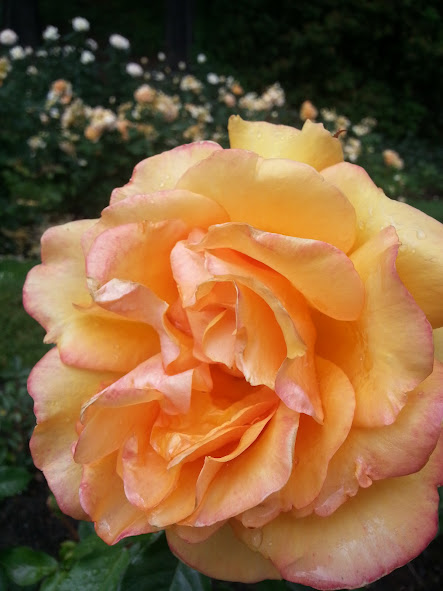 once we returned our bikes, i insisted that we make one more stop before saying goodbye to portland. even though i knew voodoo doughnut was a “must do” in portland, i opted out and took a chance on blue star donuts instead. i had heard through the grapevine that this less publicized doughnut shop was the real deal. it did not disappoint. at all. chelsea got a lemon cream doughnut and and she loved it. i got a blueberry bourbon basil doughnut and it was a special kind of delicious. i did my best to eat it slow and savor every bite.

we said goodbye to portland and headed to our next stop, ainsworth state park. once there, we picked our campsite, cooked fajitas, built a campfire, relaxed, and hit the hay. 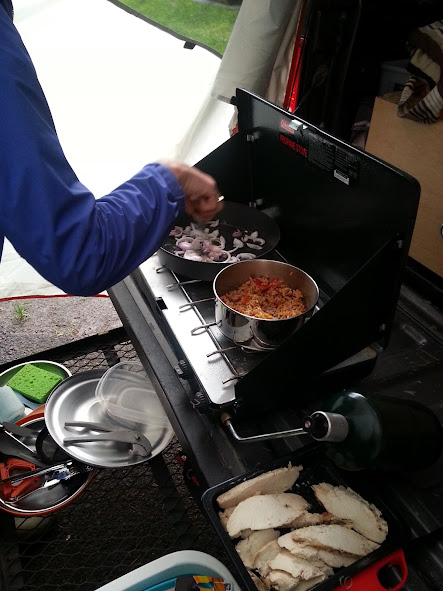 when we woke up it was cold, drizzly, and foggy, so we delayed getting ready for our hike, but once the drizzle stopped, we packed our backpacks and headed out to hike the multnomah falls area of the columbia river gorge. at first we were kind of bummed at how foggy it was, as any views provided by the mountain were completely whited out, BUT it turned out that didn’t matter because there was so much beauty right in front of our faces. 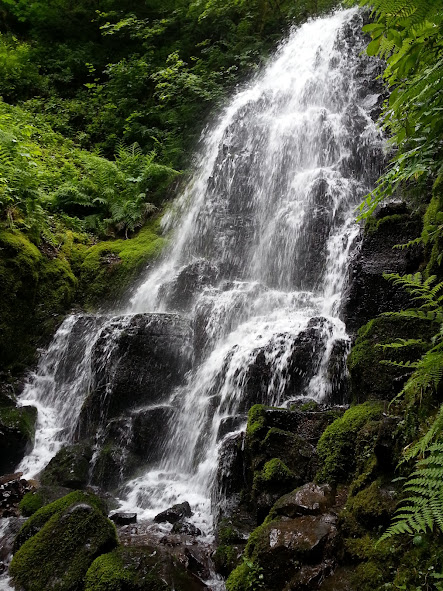 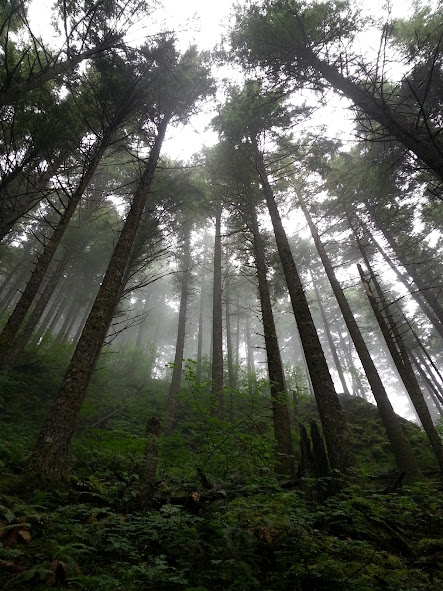 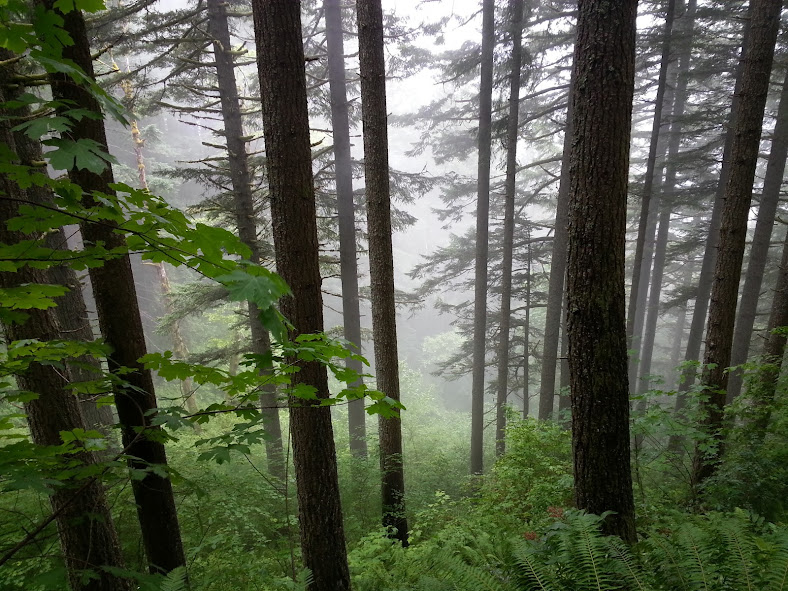 chelsea decided to lead us on an off trail adventure. we crossed and climbed over some giant logs to get to the base of a beautiful waterfall. i almost fell off a log into freezing water, but since i didn’t, i can say it was worth the risk. 🙂

there wasn’t a single part of our hike that i disliked. except the lunches we packed and my blisters…but the hike itself was wonderful! 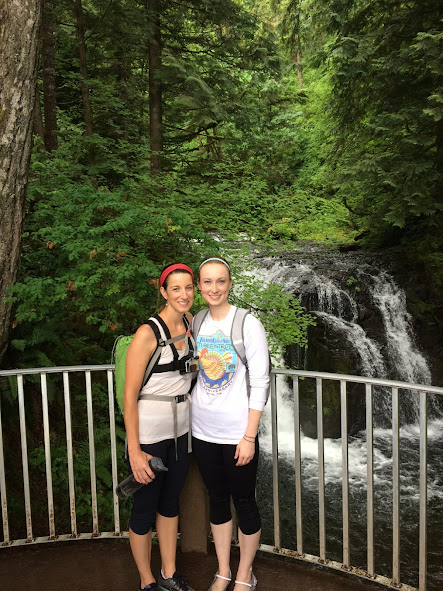 once off the mountain, we warmed up with hot drinks and headed back to the campsite to take hot showers. i don’t know how long our showers were, but they weren’t quick since it had been a couple days since we showered and weren’t sure when our next one would be.

after our pasta dinner, we headed to washington and found another (much nicer) walmart parking lot to call home for the night.

by now it’s wednesday, if you’ve lost track of days…

we woke up and headed to seattle, first, to find some coffee, and second, find a kayaking tour. we found a place called caffe fiore that looked decent so we popped in to have breakfast and plan our day. while purchasing my coffee and delish ham & cheese biscuit, i noticed some theo chocolate bars on the counter and remembered that seattle is the home of theo chocolate. luckily, we had a couple hours to kill before the kayaking tour we found and, luckily, the chocolate factory was close by and, luckily, we were able to squeeze in with another group tour. i enjoyed learning about theo’s chocolate and where it’s sourced and the process they use to make their chocolate. i also very much enjoyed sampling a TON of chocolate. they are an honest company that does things right, so do them a favor and buy some chocolate! 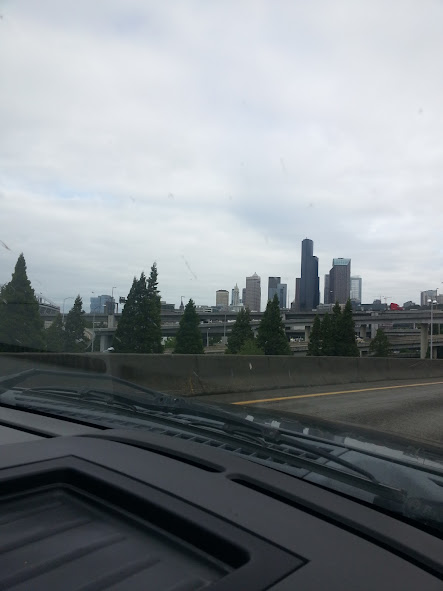 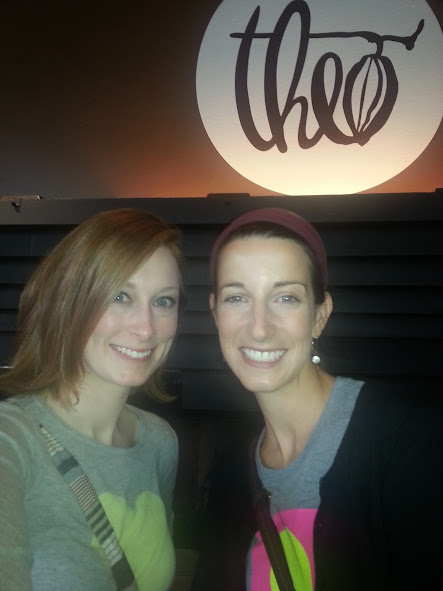 now, onto the kayaking tour. this was probably our least favorite part of the trip. it was pretty cool to see the city from the sea level, but we didn’t really go anywhere. also, i was in charge of steering and it was dumb and hard. we were glad for the experience, though. 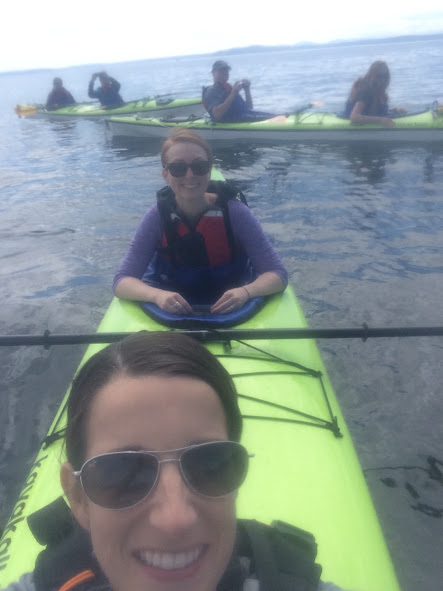 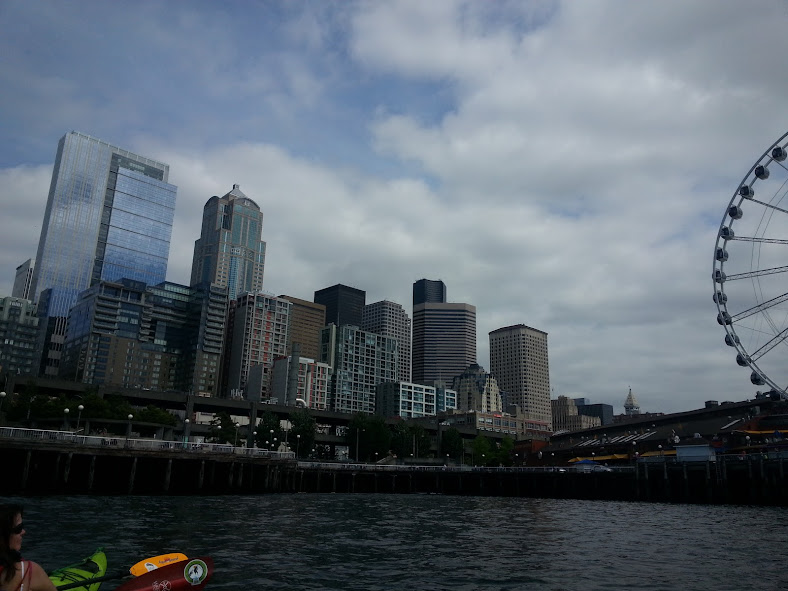 next, we spent a couple hours in a laundry mat doing laundry, obviously.

i wanted to find somewhere “off the beaten path” to eat for dinner. after extensive research, we settled on, as chelsea deemed it, a “hipster” place called the walrus and the carpenter. it WAS a pretty unique place with a relaxed, yet sophisticated vibe. i dug it. we opted to dine at the bar so we would be seated faster, which meant we got to watch oysters being shucked the whole time we were there. it was neat. the bread, salad, and drinks were excellent. our entree, smoked herring croquettes, preserved lemon, and curry aioli, was…interesting. i wouldn’t say it was disgusting and i wouldn’t say it was delicious. it was just very different from anything i’ve ever eaten and for that, i don’t regret ordering it.

after dinner we headed to canada! i was particularly excited because i was getting to use my passport for the first time. the lines weren’t terribly long at the boarder since it was around midnight when we got there. but y’all, the boarder patrol lady we dealt with was the worst! she asked chelsea a ridiculous amount of questions, which flustered her and made her seem more nervous than she was, which was not at all. chelsea used to live in california and work in mexico, so she’s crossed the boarder countless times and said she’s never had to deal with that many questions. it was almost like the lady was messing with us. whatever she was doing, it was lame.

we got to our campgrounds and went straight to bed.

it was nice to wake up in CANADA on WHALE WATCHING DAY!

we got to the place a little early so we hung out in a coffee shop until it was time to head to the boat. we cut it pretty close getting to the boat on time, but managed to get there with a few minutes to spare. even still, everyone was waiting on us. oops!

right when we left the dock, we saw a bald eagle perched on a branch. it was like it was seeing us off. how thoughtful! the trip to the whales took over an hour, but it was so worth it! the day we were out there three pods (J,K, & L pods) converged into one superpod! there were over 80 whales all around us just getting their whale on. among the whales, was “Granny,” who is estimated to be 103 years old. The whole experience was incredible! 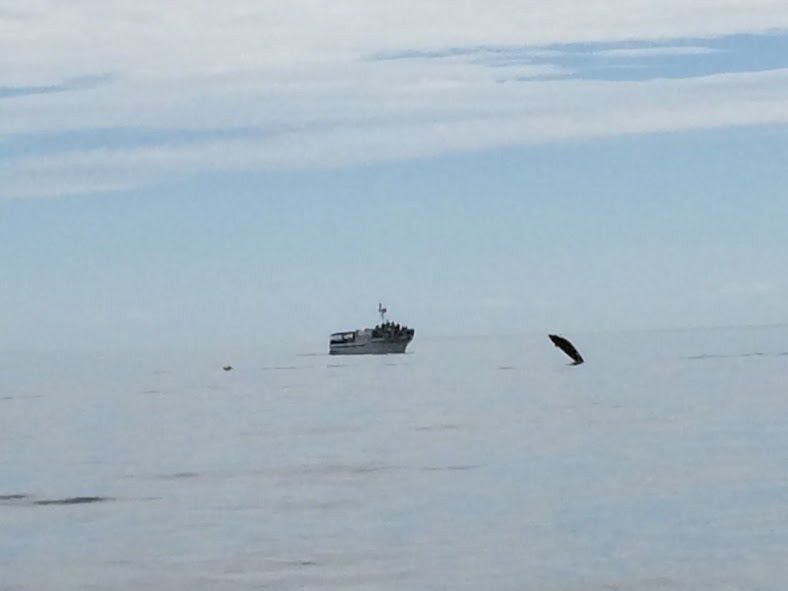 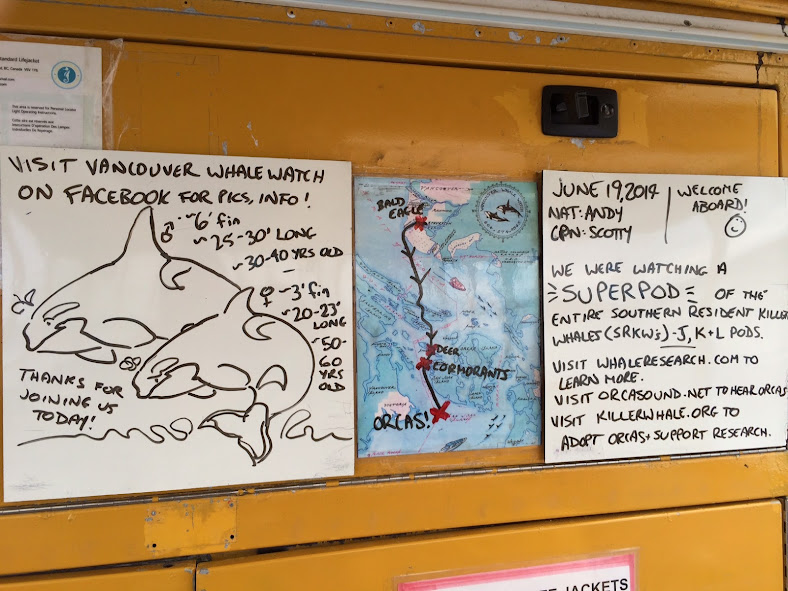 FYI nothing really happens until the 1:00 mark.